Main Lobby and Waiting Lobby
Costumes are a Cosmetic item found in the Cosmetic Menu. When activated, players are equipped with a costume over their skin. Cosmetics are represented by a Diamond Chestplate.

Costumes can only be found in Treasure Chests.

Costumes come in sets; there are currently four sets, meaning there are 16 pieces of clothing in total. When a player wears a full set, they are granted special abilities. There is an icon of TNT in the upper right-hand corner that says "Remove all Clothing", which removes all costume pieces the player has put on, including team outfits which are available in the Main Lobby. 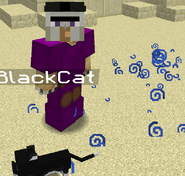